December 2013 was a rather busy month for me. I spent two weeks at a Winter School organized by Carnegie Mellon University and MS Ramaiah Institute of Technology. It was called the Internship Program in Technology Supported Education.
I was part of the Educational Games track, so we were to build a game that effectively disseminated useful knowledge to its players. We had professors from CMU and Arizona State University guide us through the process of development - from ideation, to prototype, to final product. The experience was amazing to say the least, and I like to think that the game that we finally built reflects the enthusiasm and effort that went into its development in those 15 days.
The game was made completely using Unity, a free and powerful game maker and physics engine. This was the first time that any of us in my group was using Unity, but it was surprisingly easy to learn and use. 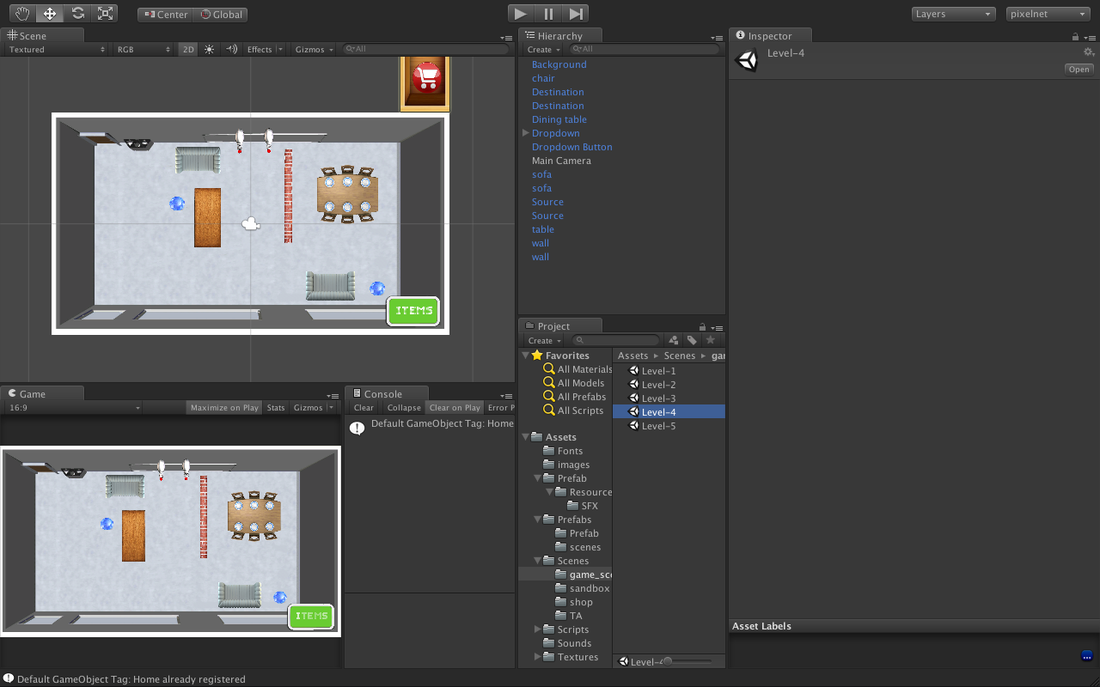 enLIGHTenment is a puzzle game, where players have to direct a ray of light from a source onto a crystal in order to chase away ghosts! The levels get progressively harder, levels introduce new concepts of light and make players think of these concepts in new ways. It also has a strong role playing aspect - Players play as a traveller who finds a village haunted by ghosts and is tasked with driving them away using the power of light.
In the process, they learn how light responds to different optical instruments like plane mirrors, spherical mirrors, glass slabs, lenses and prisms. 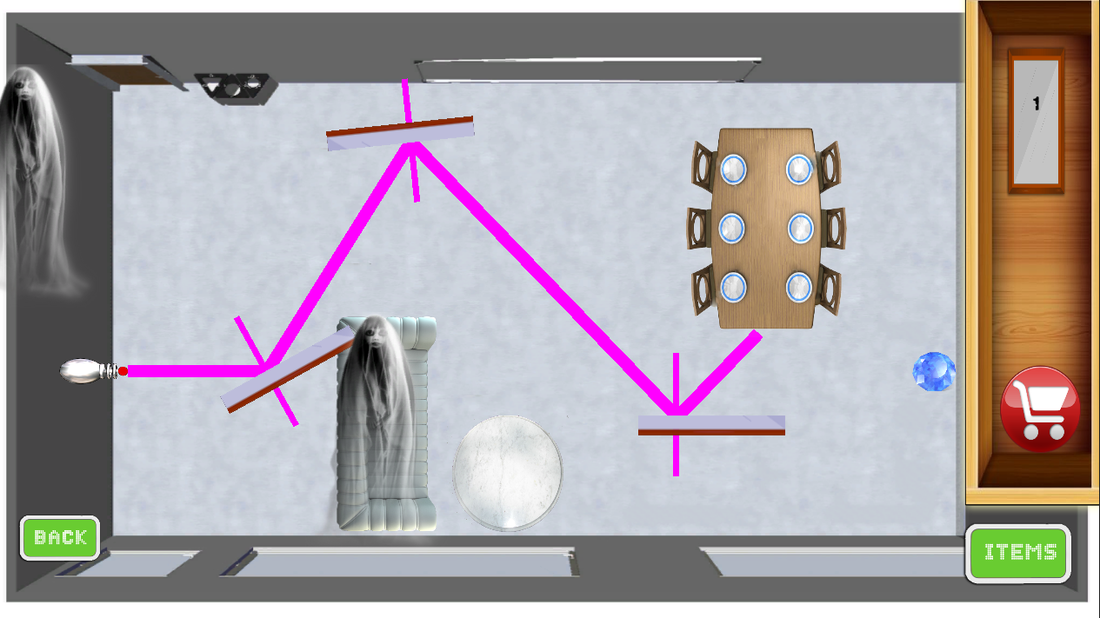 One of the levels in progress. This level uses only plane mirrors.
Training Academy

One of the main features of the game, that really accelerates learning, is what we call the Training Academy - A set of levels that introduces new topics in an easy to understand and intuitive manner. The idea is to present an ideal environment to the student where the only factors that affect the scenario are the ones that the student needs to learn about. 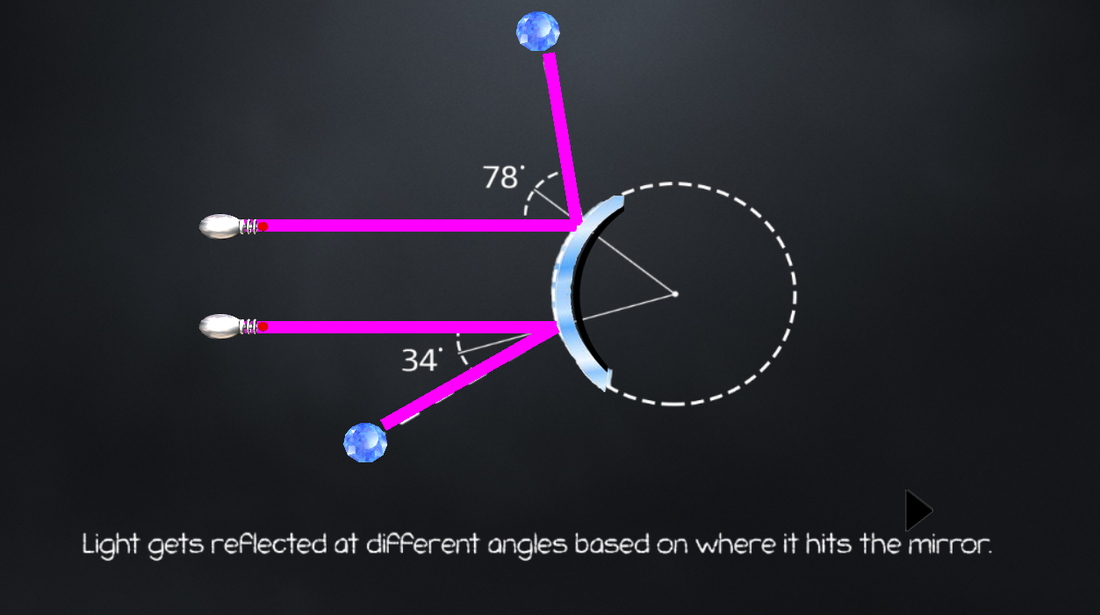 One of the levels in the training academy conveying a point on spherical mirrors. Is this mirror concave or convex? ;)
Playtesting

One of the highlights of our work in these two weeks was the playtesting that we did. We got students of 7th and 8th grades from a nearby school to come and play our game, so we could get a better sense of what worked and what was lacking. The experience was quite eye opening for us - Students' reactions to in-game events were often wildly different from what we imagined they would be. 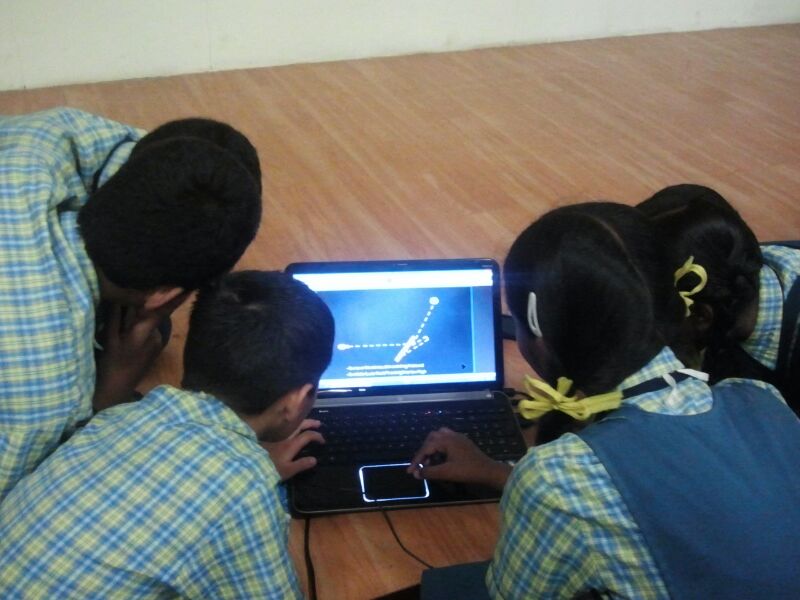 School kids trying out the game for the first time
Future Plans
We are considering submitting the game, after some polishing, to an educational games conference. The details haven't been ironed out yet. I will be updating this space as and when that happens.
Credits
This project was most definitely a team effort. Four passionate people coming together and creating something awesome! A lot of credit goes to my teammates Chandana, Shubham and Yogendra for making this happen!
Also, our mentors - Amy, Erik and Erin - for all their support and encouragement.